So, after 64 years the world’s longest running science-fiction show is making possibly its biggest change ever. Everybody’s favourite Time Lord, The Doctor, is going to be played by a woman.
I’ll let you recompose yourself…

Jodie Whittaker’s casting in the lead role was announced this week immediately following the Wimbledon Men’s grand final on the BBC. Probably one of the highest rating times the BBC could choose to make the announcement to ensure everyone found out. Within minutes, the internet had exploded and a lot of the comments show how far we have failed to progress socially in those 64 years. 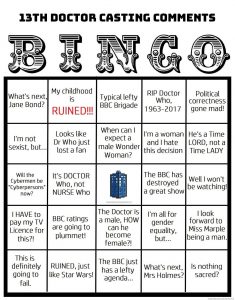 For those who don’t know back in 1966 after 3 years of being a highly rating show the producers were faced with the challenge of how to keep the show running after the retirement of William Hartnell from the lead role. The Doctor was “regenerated” into a new body, thus the mechanism by which the show has been kept running for 64 years was born. So far 14 actors have officially played the iconic role of Doctor, all white British and very very male.

The idea of a female Doctor has been floated many times, with everyone from Dame Judy Dench to Tilda Swinton being considered. Joanna Lumley even played a female doctor for 2 minutes in a charity parody in 1999. However, the formula of a male Doctor with a female companion has not been deviated from in 64 years. The occasions when a male joined the Doctor’s crew there was always still a female companion in the TARDIS.

So why are things changing now?

Chris Chibnall is taking over the role of Show Runner/Producer from 2018. With Peter Capaldi retiring form the lead role Chris has a blank slate to start from and he is running with it. He is quoted as saying;
“I always knew I wanted the Thirteenth Doctor to be a woman and we’re thrilled to have secured our number one choice. Her audition for The Doctor simply blew us all away. Jodie is an in-demand, funny, inspiring, super-smart force of nature and will bring loads of wit, strength and warmth to the role. The Thirteenth Doctor is on her way.”

Having a Time Lord change genders is not without precedent in the show. Gender changing was mentioned in passing during the Matt Smith era story “The Doctor’s Wife”, while in Capaldi’s era we saw a white male Time Lord get shot and regenerate into a black female and no one flinched. Most impressively the Doctor’s childhood friend/nemesis The Master was skilfully played by Michelle Gomez as Missy for the past 3 seasons. Most fans were accepting of these characters switching genders.
So, what’s happened? Why is the online world suddenly split into 2 camps, for and against a female Doctor? Some of the comments I culled from a quick search of face book are below. You can see that people are very passionate.

I am left to wonder what is it that is upsetting people so much. Is it the erosion of 60 years of white privilege? Or could it be their unconscious bias becoming a little less unconscious at being challenged? Or is it that in the politically unstable times we are experiencing – Brexit in the UK and Trump in the US – that people are more resistant to change, especially in things that bring them a sense of comfort and escape.

Whatever happens I’m sure in 6 months when Jodie appears in the role many, if not most of the people declaring they will never watch again will tune in, just to scoff and beat their chests and say how bad it is. Many of them will keep watching, reluctantly coming to like and even love Jodie in the role, after all this happens with every new Doctor and is a familiar cycle to long-time fans.
I believe that eventually the storm will end and Doctor Who will continue to prove that it can handle social issues in a relevant, engaging and entertaining way, just as it has with women’s rights (Thanks Sarah-Jane Smith), Bi-Sexuality (Thanks Captain Jack), Homosexuality (Thanks Bill) and race (Thanks Martha Jones and many others).

I applaud Chris Chibnall and Jodie Whittaker and everyone else involved in the decision. I believe that when institutions like Doctor Who make changes it is because they are catching up to where society is really at. Equality for women is still not something we have achieved as a society; however, I sense that this is a sign we are increasingly moving in the right direction.